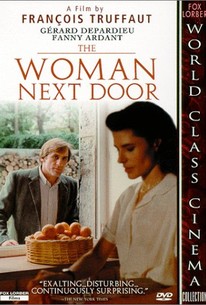 François Truffaut's The Woman Next Door continues his fascination with obsessive love. It was also his first collaboration with Fanny Ardant, who would become his favored leading lady for the last phase of his career and offscreen love for the last years of his life. Bernard Coudray (Gerard Deparidieu) is a happily married man living in the village of Grenoble; his life is knocked askew when Philippe and Mathilde Bauchard move in next door, and Mathilde (Ardant) proves to be Bernard's long-ago lover. Truffaut and his screenwriters deftly allow the couple to slide into an affair, slowly revealing that their previous relationship ended without a firm resolution. Mathilde, married more recently than Bernard, to a devoted man some years older than her, senses the futility of revisiting the past, but her attempts to break off the relationship inflame Bernard. When Bernard begins to regret his own reckless behavior, Mathilde's understandable confusion leads to a nervous breakdown. Poorly received by critics who had written off Truffaut as irrelevant, The Woman Next Door is very much the work of the man who made Jules and Jim, Mississippi Mermaid, and Two English Girls.