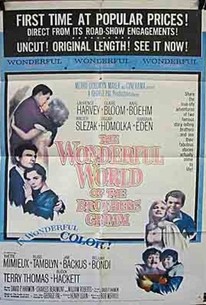 The Wonderful World of the Brothers Grimm

The Wonderful World of the Brothers Grimm Ratings & Reviews Explanation

This collection of time honored and beloved children's stories comes to life with the help of special effects. The fictionalized accounts of the lives of Wilhelm Grimm (Lawrence Harvey) and brother Jacob (Karl Boehm).The brothers are requested to write the history of a local duke and his noble family. The imaginative brothers are probed to telling their own collection of fables. In "The Dancing Princess" the King (Jim Backus) wonders why his daughter (Yvette Mimieux) wears out her slippers every day. He offers his daughter's hand in marriage to the man who can solve the mystery. Woodsman (Russ Tamblyn) follows her at night to the camp of dancing gypsies, where the princess dances the night away. The princess and the woodsman dance together and fall in love, and the benevolent King gives his blessing to their impending marriage. In "The Cobbler And The Elves" the cobbler (Lawrence Harvey) falls behind in his shoe repair business when he carves wooden elves for needy children. One night, the elves magically come to life and help the kindly cobbler by completing the unfinished work he has neglected by helping bring happiness to the children with his original toys. Part three is "The Singing Bone." Ludwig (Terry-Thomas) is a conniving knight who takes credit for slaying a dragon. Hans (Buddy Hackett) is the real dragon slayer, but he is killed by Ludwig to silence him. One of Han's bones comes to life as a singing instrument and tells the truth about the dragon. Hans is brought back to life for his honesty, and Ludwig becomes his servant as Hans becomes a noble knight. In between the fables, the duke pressures the brothers Grimm for the finished product on his family's history. The duke fires the brothers, and a disheartened Wilhelm becomes sick and nearly dies. His fairy tale characters come to life one night to tell Wilhelm he must pull through so their stories can be told to children all over the world. This film is delightfully entertaining for children of all ages.

Oscar Homolka
as The Duke

Yvette Mimieux
as The Princess

Russ Tamblyn
as The Woodsman

Jim Backus
as The King

Beulah Bondi
as The Gypsy

Clinton Sundberg
as The Prime Minister

Walter Brooke
as The Mayor

Sandra Gale Bettin
as The Ballerina

Robert Foulk
as The Hunter

Otto Kruger
as The King

Robert Crawford Jr.
as The Shepherd

Sydney Smith
as The Spokesman

Peter Whitney
as The Giant
View All

Critic Reviews for The Wonderful World of the Brothers Grimm

Audience Reviews for The Wonderful World of the Brothers Grimm

There are no featured audience reviews for The Wonderful World of the Brothers Grimm at this time.

The Wonderful World of the Brothers Grimm Quotes