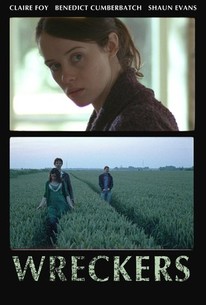 A family is abruptly confronted with ugly side of their history in this independent drama from Great Britain. David (Benedict Cumberbatch) and Dawn (Claire Foy) are a couple who have moved from the city to a small rural community in Kent, where David lived as a boy. David enjoys his new job (which occupies much of his time) and the serenity of the countryside, but Dawn is less enamored with her new career as a housewife, and she's becoming frustrated with their unsuccessful efforts to have a baby. One day, Dawn is surprised by the arrival of her brother Nick (Shaun Evans), who is back on leave after serving in Afghanistan. Dawn is happy to see Nick, but David is significantly more wary, and as it becomes increasingly clear that Nick's experiences in combat have taken a fearsome emotional toll on him, he begins discussing some painful secrets from his family's past, some of which also involve David. Wreckers was the first dramatic feature from director D.R. Hood, who was previously responsible for a handful of documentaries and short subjects.

Georgie Smith
as Gemma
View All

There are no featured audience reviews for Wreckers at this time.