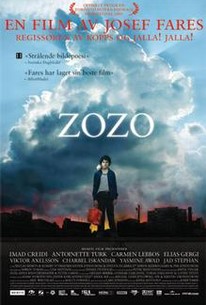 A young boy faces challenges both funny and terrifying in this drama from writer and director Josef Fares. It's 1987, and Zozo (Imad Creidi) is a ten-year-old boy whose parents are struggling to flee Beirut as warfare in the streets accelerates. Zozo's grandparents have emigrated to Sweden, and his mother and father plan to follow as soon as their passports and exit visas are approved. On the day that their papers finally come through, Zozo's mother asks him to go outside and get something for her -- and just misses being killed by the shell that explodes into their home. With his parents dead and his older brother missing, Zozo sees little choice but to fetch his passport and airline ticket and make his way to the airport on foot. With his pet bird in tow and a young girl named Rita (Antoinette Turk) who is running away from home for company, Zozo sets out on the long walk that will be the first leg in his journey to a new home. In time, Zozo makes his way to Sweden, where he's taken in by his grandmother (Yasmine Awad) and grandfather (Elias Gergi). However, Zozo feels like a fish out of water in his unfamiliar surroundings, and the increasingly eccentric behavior of his grandparents does nothing to make him feel more comfortable in this strange land. Zozo was loosely inspired by the youthful experiences of Josef Fares, who himself emigrated to Sweden when he was ten. ~ Mark Deming, Rovi