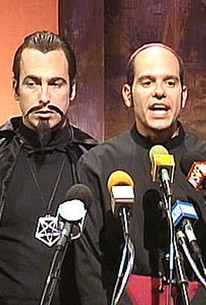 It's a No Brainer
Mr. Show With Bob and David Season 3

Protestors (Bob Odenkirk and David Cross) in the audience interrupt Bob and David as they introduce the show. The protestors demand to be thrown out, and are obliged. Out on the street, they find themselves hungry and without funds. They quickly make up picket signs and chant, "Give us a hot dog, we demand! Or close down this hot dog stand!" until they cajole a vendor into feeding them. After protesting to get a car, and to get laid, the boys end up protesting their way to the top, eventually becoming the heads of a large oil company. At a protest outside the company's offices, a television newsman (Paul F. Tompkins) sparks a riot by sneakily throwing a rock at a cop. Tompkins turns out to be from "On the Spot News 6," and their motto is "We make the news." In another sketch, Lamar (Bob) and Geoff (David) try to start their own "Make-a-Wish" style charity, promising terminally ill children meetings with celebrities like Michael Jackson and Shaquille O'Neal, after which Geoff tries to reach Jackson by calling information for Los Angeles. This episode also features a commercial for "Crazy Devil Kiddie Massage Cream," a product aimed at children, because "Fun and games can be hard on muscles." It's also noted that "All the major 'play points' can be a target for aches and pains." Products like these are condemned at a press conference, at which a satanic priest (Bob) and a Catholic archbishop (David) team up to ask the media for more responsible depictions of Satan.

It's a No Brainer Photos 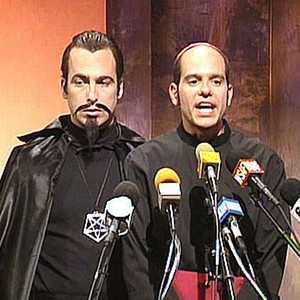