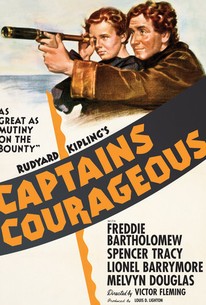 A boy learns life-changing lessons about the importance of friendship and the dignity of labor in this adventure saga based on a story by Rudyard Kipling. Young Harvey Cheyne (Freddie Bartholomew) is the working definition of a spoiled brat; the only child of a wealthy widowed businessman, Harvey has everything he needs, but never stops asking for more, convinced he can get anything if he yells, pouts, or throws the right tantrum. Even other boys his age are disgusted with his antics, and when he accompanies his father on an ocean cruise, he finds he has no friends to play with. After wolfing down six ice-cream sodas, Harvey gets sick to his stomach and while vomiting over the side of the ship, he falls into the drink. He is rescued by Manuel (Spencer Tracy), a Portuguese old salt who drags him on board a Gloucester fishing boat where he's a deck hand and doryman. Harvey shows no gratitude to Manuel for saving his life and demands to be taken home immediately; Manuel and the crew, not the least bit sympathetic, inform him that once they've filled the ship's hold with fresh catch, they'll return to shore, and not a moment sooner. Over the next few weeks, Harvey grows from a self-centered pantywaist into a young man who appreciates the value of a hard day's work, and in Manuel he finds the strength, guidance, and good sense that he never got from his father. Spencer Tracy earned an Academy Award for his performance in Captains Courageous and even sings a bit; the story was parodied years later (with a few rather drastic changes) in the Chris Elliott vehicle Cabin Boy.

Lloyd Ingraham
as Skipper of Ship