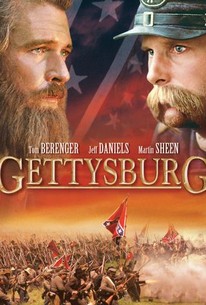 Gettysburg's reverent approach to history is balanced with the committed work of a talented cast - and the hard-hitting dramatization of a bloody turning point in the Civil War.

The Pulitzer Prize-winning novel The Killer Angels by Michael Shaara becomes this sprawling historical epic. As in Shaara's novel, director Ronald Maxwell focuses on a handful of major players to dramatize the events of July 1863, when the armies of the Union and Confederacy clash at the small Pennsylvania town of the title. Among them are Martin Sheen as General Robert E. Lee, who disagrees with his top advisor, General James Longstreet (Tom Berenger) over battle strategy, and Jeff Daniels as Colonel Joshua Lawrence Chamberlain, a college professor whose unorthodox techniques save the day (and possibly the war) for his beleaguered army. Other cast standouts include Richard Jordan in his final film appearance as the ill-fated General Lewis Armistead, and cameo roles for Civil War buff Ken Burns and media mogul producer Ted Turner. Filmed on-location at Gettysburg National Military Park, Gettysburg was shot as a television miniseries for Turner's TNT cable channel, but earned a limited theatrical release. ~ Karl Williams, Rovi

Curtiss Bradford
as Another Officer

George Heffner
as Another Officer

Steve Leone
as An Officer

C. George Werner
as Another Officer