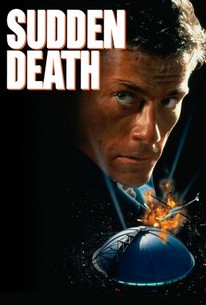 Sudden Death may not be a classic, but exciting set pieces and strong work from Jean-Claude Van Damme help this action thriller pay off part of its Die Hard debt.

Pittsburgh Penguins owner Howard Baldwin was the producer of Sudden Death, and the action is set in his hockey arena, in which the Penguins are playing the Chicago Blackhawks. Pittsburgh fire inspector Darren McCord (Jean-Claude Van Damme) is attending the game with his two children. He's quit fighting fires because of a tragedy a few years earlier involving a child he couldn't save. Also at the game is the vice-president of the United States (Raymond Barry), who is the target of a terrorist plot. The terrorist leader, an insane ex-CIA agent named Joshua Foss (Powers Boothe), has masterminded a scheme to hold the vice-president hostage in his luxury suite while demanding that payments be transferred to his account electronically at the end of each period of the game. If he doesn't get his money, he will kill one member of the vice-president's party at the end of each period, and at game's end he will order ten bombs hidden in the arena to be detonated with all 17,000 fans present. McCord discovers the plot while his daughter Emily (Whittni Wright) is kidnapped by the terrorists too. McCord must dispatch the villains and find the bombs, while saving all the hostages. Luckily, he is adept at martial arts. He fights one henchman dressed in a Penguins mascot outfit in the arena's kitchen, and another terrorist on the arena's retracting dome. At one point, McCord switches identities with a player, is sent into the game, and scores a goal. Director Peter Hyams also directed Van Damme in the blockbuster Timecop. ~ Michael Betzold, Rovi

Pat Brisson
as Player No. 2

Gil Combs
as Secret Service No. 1

Raymond Laine
as Foss Man No. 1

Jean Pierre Nutini
as Employee No. 1

Luc Robitaille
as Himself

Vinnie Sciullo
as Foss Man No. 2

Brian Smrz
as Thug No. 2

Phil Spano
as Player No. 1