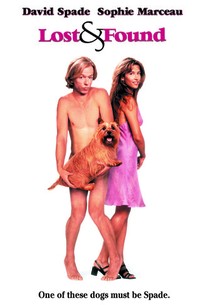 Aside from a few laughs, everything else is entirely predictable, including the jokes.

Just how low will a guy sink in order to impress the woman of his dreams? How does stealing her dog sound? In Lost and Found, David Spade plays Dylan, who is about to open an new restaurant and has finally found the perfect apartment. The apartment just gets better when he meets his new neighbor, Lila (Sophie Marceau), a very beautiful women who has recently come to the United States from France. However, Lila has just gotten out of a bad relationship with René (Patrick Bruel), who doesn't want to leave her alone, so she has little interest in romance, preferring to devote herself to her cello and her dog Jack. One day, Jack runs away and Dylan finds him; when he returns the pooch to Lila, it's the first time she's been willing to speak in full sentences to him, though not for very long. Faster than you can say "That idea is so crazy it just might work!", Dylan decides to kidnap Jack; when Lila thinks the dog is lost, Dylan will generously volunteer to help look for him, which will give Dylan a chance to impress Lila when he's able to find Jack so quickly. Sure enough, Dylan swipes the dog, but from that point on the plan hardly goes the way he had hoped. Star David Spade also co-wrote the screenplay with J.B. Cook and Marc Meeks; the supporting cast includes Martin Sheen, Mitchell Whitfield, Artie Lang and Jon Lovitz.

Ever Carradine
as Ginger

Stephanie Chang
as Restaurant Patron No. 2

Neal McMillan
as Restaurant Patron No. 1

David Garry
as Joby the Valet

Della Miles
as Singer No. 1

Erika Nann
as Singer No. 2

Cynthia Bass
as Singer No. 3

Don Perry
as Guest at Millstone's

News & Interviews for Lost and Found

Critic Reviews for Lost and Found

Audience Reviews for Lost and Found