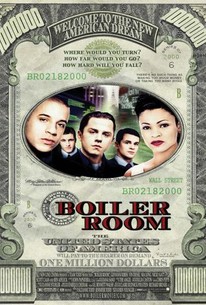 Its ending is disappointingly tidy, but Boiler Room boasts just enough sharp writing and brisk pacing to make getting there worthwhile.

In this drama that explores greed and corruption in American business, Giovanni Ribisi plays Seth Davis, an intelligent and ambitious college dropout who runs a casino in his apartment. Eager to show his father that he can succeed, Seth lands a job with a small stock brokerage firm. He is given a space in the company's "boiler room," where he makes cold calls to prospective clients. As it turns out, Seth has a genuine talent for cold calling, which gains him the approval of his superiors, the admiration of his father, and the attentions of one of his co-workers, Abby Hilliard (Nia Long). However, the higher up the ladder Seth rises, the deeper he sinks into a quagmire of dirty dealings, until he's breaking the law in order to keep his bosses happy and his paychecks coming. The Boiler Room also features Tom Everett Scott, Scott Caan, Jamie Kennedy, Nicky Katt, and Ben Affleck in a cameo as the headhunter who brings Seth into the firm. Ribisi and Scott also appeared together in That Thing You Do; Ribisi was the drummer replaced by Scott, who then led The One-Ders to fictional pop stardom.

Will McCormack
as Mike the Casino Patron

Gillian Sacco
as Waitress at Mickey's