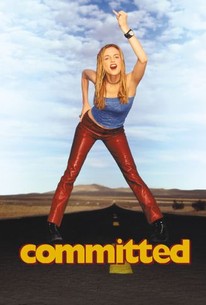 Critics say Committed is one of those films that shows promise -- some sort of vision -- of what the movie could have been. The key word is "could." As it is, the script is predictable, the story becomes tedious, and it's simply not funny. Heather Graham shows she can play a central character, but she's not enough to make Committed successful.

Heather Graham stars in this indie exploration of love and marital commitment directed by Lisa Krueger. A hardcore believer in the sanctity of marriage, plucky Joline (Graham) is stunned when her husband Carl (Luke Wilson) abruptly dumps her, leaving only a vaguely-worded note to explain himself. Undaunted, Joline leaves New York to look for her man and discovers him in the wild west of El Paso, Texas, after meeting a bevy of ne'er-do-wells and weirdos along the way. She discovers that Carl is shacked up with a beautiful Hispanic woman named Carmen (Patricia Velasquez). Meanwhile, Joline's flirtatious brother Jay (Casey Affleck) shows up from the Big Apple to look after his sister. Later, two men enter Joline's life. One is Neil (Goran Visnjic), Carl's hunky, beguiling neighbor, who increasingly becomes the object of Joline's affection, and Grampy (Alfonso Arau), an aging Mexican medicine man who becomes Joline's spiritual guide. This film was screened at the 2000 Sundance Film Festival.

Javier Renteria
as Cop No. 1

Rafael Anaya
as Cop No. 2