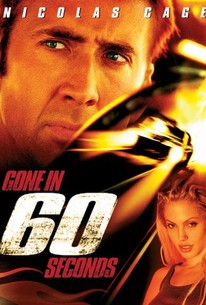 Even though Oscar-bearers Nicolas Cage, Angelina Jolie, and Robert Duval came aboard for this project, the quality of Gone in 60 Seconds is disappointingly low. The plot line is nonsensical, and even the promised car-chase scenes are boring.

In this action thriller, a master car thief has his skills pushed to the limit. Randall "Memphis" Raines (Nicolas Cage) can steal practically any car that crosses his path. While he has done well in his life of crime, he knows that there's a short future in theft, and he wants to get out of the business. But his retirement plans are interrupted when his younger brother Kip (Giovanni Ribisi) gets in trouble with a dangerous crime boss. To get his brother out of harm's way, Randall agrees to a profitable but risky scheme to steal 50 luxury cars in one night, with the help of several other car thieves, including Sara "Sway" Wayland (Angelina Jolie). A rival group of thieves is trying to pull the same stunt at the same time, and detectives Castlebeck (Delroy Lindo) and Drycoff (Timothy Olyphant) are trying to shut down both operations. Also starring Robert Duvall as Otto Halliwell, and Scott Caan as Tumbler, Gone in Sixty Seconds is a remake of the 1974 low-budget action hit of the same name, best remembered for a 40-minute chase scene in which 90 cars were destroyed.

Will Patton
as Atley Jackson

Vinnie Jones
as The Sphinx

Rainbow Borden
as Car Jacker No. 1

Scott Burkholder
as Rent A Cop

Juan Pina
as Gang Banger No. 2

News & Interviews for Gone in 60 Seconds (Gone in Sixty Seconds)

Critic Reviews for Gone in 60 Seconds (Gone in Sixty Seconds)

Audience Reviews for Gone in 60 Seconds (Gone in Sixty Seconds)