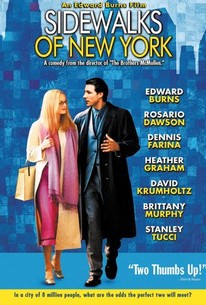 Though well-acted, Sidewalks of New York generally comes off as a second-rate Woody Allen film. The characters seem self-absorbed, the problems trite.

A documentary film crew follows the lives of six New Yorkers as their lives unexpectedly intersect -- or at least that's what writer, director, and actor Edward Burns would like you to believe in this comedy-drama that looks at the rocky road of relationships in the Big Apple. After sharing the stories of their earliest sexual experiences with an interviewer, six people are trailed by a cameraman through the course of an average day. Tommy (Edward Burns) is a successful television producer (and unsuccessful novelist) who becomes quickly infatuated when he meets Maria (Rosario Dawson) in a video store. Maria is a teacher at an upscale private school who has just gotten out of a bad marriage with Ben (David Krumholtz), a struggling musician with a day job as a doorman. Ben, on the other hand, finds himself attracted to Ashley (Brittany Murphy) when she waits on his table at a coffee shop. Ashley, as it happens, is involved in an affair with Griffin (Stanley Tucci), a dentist who is chronically unfaithful to his wife Annie (Heather Graham). Annie, a real estate agent, also happens to be friends with Tommy, one of her customers, bringing the circle to a close. Shot in only 16 days, Sidewalks of New York marked a return to (relatively) low-budget filmmaking for Edward Burns, who directed two less-than-successful major studio projects following his breakthrough with the independent feature The Brothers McMullen.

Ted Neustadt
as Doctor
View All