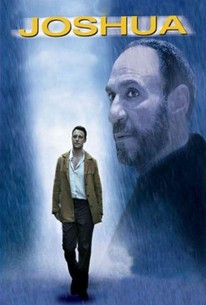 Joshua is well-intentioned, but too heavy-handed.

A mysterious stranger brings both spiritual comfort and a certain level of distrust to a small community in this drama based on the spiritual best-seller by Joseph Girzone. A mysterious man named Joshua (Tony Goldwyn) arrives in the small Midwestern town of Auburn sometime in the late 19th century. Joshua sets up a carpentry shop in Auburn, and soon develops a reputation for his kind and unselfish nature; after bad weather nearly destroys a church in the town's African-American neighborhood, Joshua offers to help repair the building, and has soon persuaded much of the community to offer their support, including Father Pat (Kurt Fuller), a priest at Auburn's Catholic church. Father Pat's superior, Father Tardone (F. Murray Abraham) is also struck by Joshua's talent, charm, and humble desire to help others, and asks him to carve a new statue of Saint Peter for their church. However, while much of the town is following the good example set by Joshua, when people begin to ascribe supernatural powers to the town's new carpenter, Father Tardone begins to become suspicious, and wants to know who Joshua really is and what he really intends to do in Auburn. Joshua features an original song score by popular contemporary Christian musician Michael W. Smith.

Giancarlo Giannini
as The Pope

There are no featured audience reviews for Joshua at this time.