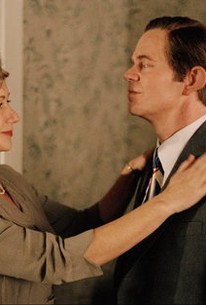 Door to Door is the inspirational true story of a man who refused to let severe physical debilitation get in the way of his life's goal. William H. Macy (who also co-wrote the script) stars as Bill Porter, a Portland, OR, native born with cerebral palsy. Despite his spastic walk and oddly shaped countenance, Bill intends to succeed in life on ability rather than the pity of the unafflicted. Thus, in 1955, he manages to land a job as a door-to-door salesman for the Watkins Company. At first, Bill meets with nothing but slammed doors, hostile dogs, and unashamed hostility from "normal" people; but after making his first sale to a reclusive alcoholic named Gladys (Kathy Baker), there is literally no stopping him. For next 40 years, Bill walks some eight to ten miles per day plying his trade, winning one "salesman of the year" award after another. Also in the cast is Helen Mirren as Bill's supportive but aphasic mother, and Kyra Sedgwick as Bill's young assistant, Shelley, whose Herculean efforts to get the hero to "modernize" his tried-and-true methods invariably come a cropper. Door to Door debuted July 14, 2002, over the TNT cable network.

Critic Reviews for Door to Door

Audience Reviews for Door to Door