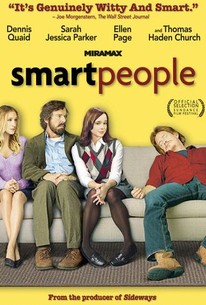 Despite its sharp cast and a few laughs, Smart People is too thinly plotted to fully resonate.

Commercial director Noam Murro makes the leap to feature films with this comedy drama concerning an aging professor-turned-bitter eccentric due to the death of his longtime wife. Ever since his wife passed away, Lawrence Wetherhold (Dennis Quaid) has become overly acerbic and self-absorbed. He's alienated his son (Ashton Holmes) and transformed his daughter (Ellen Page) into a friendless overachiever. Now, at the precise moment Lawrence thought he had finally figured it all out, his life comes crashing down all around him as he falls for a former student (Sarah Jessica Parker) and his shiftless adopted brother (Thomas Haden Church) comes knocking on the door in search of a place to stay. Though Lawrence always relied on his intelligence to get him out of life's little jams in the past, it's going to take quite a bit more than intellectual thinking to move past this sticky stage in his suddenly chaotic life. David Denman and Christine Lahti co-star in this romantic comedy drama, which serves as the screenwriting debut of Goats and Modern Ranch Living author Mark Jude Poirier. ~ Jason Buchanan, Rovi

Scott A. Martin
as Weller

Jose A. Rivas
as Student
View All