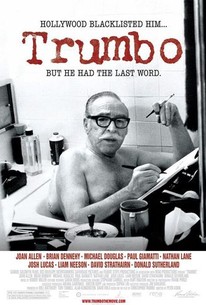 Trumbo celebrates the life and work of blacklisted screenwriter Dalton Trumbo with measures of humor and sadness.

A documentary adaptation of the popular regional theatrical monologue -- in which such heavyweights as Paul Newman, Nathan Lane, and Joe Mantegna essayed the lead on various occasions -- Trumbo recounts the life and times of legendary Hollywood scribe-turned-HUAC scapegoat Dalton Trumbo. As with its source production, the film takes as its base material highly personal, detailed, and emotive letters written by Dalton Trumbo to his son, Christopher; the latter, in turn, molded the missives into a screenplay for this production. Here, however, in lieu of one actor portraying Dalton, a number of celebrities take turns narrating from the script, including Lane, Paul Giamatti, Brian Dennehy, Donald Sutherland, and others. As a visual accompaniment, the film intercuts home-movie footage from the Trumbos' lives; incisive interview material with Trumbo, his family, friends, and collaborators; and haunting glimpses of the HUAC trial hearings with the Hollywood Ten, led by Senator Joseph McCarthy; as well as extracts from The Sandpiper, Johnny Got His Gun, Spartacus, and other productions authored by Trumbo. Peter Askin, who helmed the stage play, directs. ~ Nathan Southern, Rovi

Critics Consensus: WALL-E Is the Best-Reviewed Film of 2008
View All