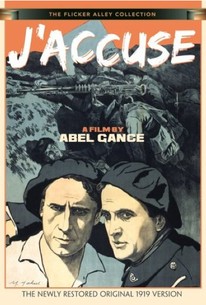 France's innovative film pioneer Abel Gance had already served briefly in World War I, but he enlisted again so he could film hair-raising footage of soldiers under fire. He used the shots in this compelling anti-war epic, which originally ran 14 reels (it was cut down to ten for release in the U.S., which unfortunately damaged its continuity). Marie Lazare (Marise Dauvray) is forced by her father (Maxime des Jardins) to marry the much-older Francois Laurin (Severin-Mars), even though she's in love with Jean Diaz, a poet (Romuald Joube). The jealous Laurin goes wild at the idea that his young wife may have betrayed him. When the World War breaks out, he goes to the front. Diaz, a pacifist, stays home until Marie is captured by the Germans. Then he enlists and winds up being in command over Laurin. Over the course of four years, the two men become friends. Diaz gets trench fever and is sent home. Marie returns with a baby -- she was raped by several of her captors and does not know which one is the baby's father. When Laurin comes home, he mistakenly believes that the child is Diaz's. After he is convinced he was wrong, he goes back to his regiment, and is killed in the fighting. Diaz also returns to battle and is wounded. He comes home, but he has lost his mind. He has a vision in which the dead return from their graves to see if their loved ones are worthy of their sacrifice. He dies, leaving Marie alone with her child. Gance would create a masterful remake of this film in 1937. ~ Janiss Garza, Rovi

Critic Reviews for J'Accuse! (I Accuse)

Audience Reviews for J'Accuse! (I Accuse)

There are no featured audience reviews for J'Accuse! (I Accuse) at this time.