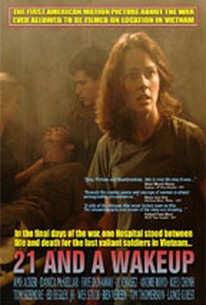 21 and a Wake-Up Ratings & Reviews Explanation

21 AND A WAKEUP is the first American motion picture about the Vietnam War ever allowed by the communist government in Hanoi to film on the real locations where the war took place.Produced in conjunction with Vietnam's state-owned Feature Film Studio Number One, the picture was Written and Directed by ex-Marine Chris McIntyre, who served during the height of the Vietnam War.The picture takes place over a hundred hour span of the 24th Evacuation Hospital, the last major Army Hospital to close as America had given up the fight and was going home.The film is based on real events, focusing on the lives of three young nurses, one of whom undertakes a treacherous journey up the Mekong River to Cambodia to save a very young Vietnamese-American girl before her life is destroyed during the American bombing of Cambodia.The title 21 AND A WAKEUP has three meanings: 1) A major event transforms nurse Caitlin Murphy when she has but three weeks left in-country; 2) The average age of Nurses in Vietnam, who woke up to the horror of a conflict they could never have imagined, and 3) The 21 years America was involved in Vietnam, from 1954 to 1975, waking up to the first war the US ever lost.The preamble to the film is narrated by Walter Cronkite, featuring black-and-white photography from North Vietnamese archives in Hanoi never before seen in the West.The film created such interest in military circles that director Chris McIntyre was invited to speak to the graduating class at West Point about the picture during pre-production in 2007. --© Official Site

Critic Reviews for 21 and a Wake-Up

Audience Reviews for 21 and a Wake-Up

There are no featured audience reviews for 21 and a Wake-Up at this time.