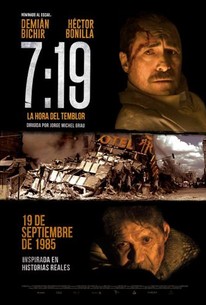 A night watchman and several employees of a Government office are in the lobby of the building they work in; they are there earlier than usual because of a special request. We can hear the early morning news on an old black and white TV that sits on the watchman's desk; news anchor Lourdes Guerrero reads the news. Unexpectedly, an earthquake buries all of them beneath nine stories of concrete and twisted metal. It's 7:19 in the morning on September 19, 1985. Along with them over 40 thousand people dissapppeared under the rubble of a defeated city. This is the story of Martin Soriano and Fernando Pellicer, two men who, just like thousands others in the most destructive earthquake in the history of Mexico, found an unjust but unavoidable death. "7:19 AM" is a feature lenght film that reflects on how and why one must leave this life. Two men that go from fear to anger on the road to resignation. Two men separated by their social status, their beliefs, their education and that, paradoxically, work in the same city and on the same building. Martin Soriano and Fernando Pellicer live on different universes but destiny forces them to face death together; now, more than ever, they will have to bring down the borders that divide them. An event that shocked the whole world, a tragedy that the Country has not been able to overcome. However, it helped discover the capacity for solidarity that lives inside all of us; the tragedy managed to erase the boundaries that separated us as Mexicans, the entire world blurred it's limits for an instant to show it's support and humanity.