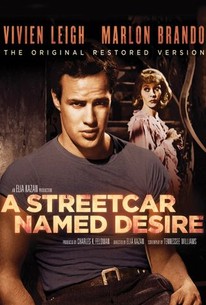 A feverish rendition of a heart-rending story, A Streetcar Named Desire gives Tennessee Williams' stage play explosive power on the screen thanks to Elia Kazan's searing direction and a sterling ensemble at the peak of their craft.

In the classic play by Tennessee Williams, brought to the screen by Elia Kazan, faded Southern belle Blanche DuBois (Vivien Leigh) comes to visit her pregnant sister, Stella (Kim Hunter), in a seedy section of New Orleans. Stella's boorish husband, Stanley Kowalski (Marlon Brando), not only regards Blanche's aristocratic affectations as a royal pain but also thinks she's holding out on inheritance money that rightfully belongs to Stella. On the fringes of sanity, Blanche is trying to forget her checkered past and start life anew. Attracted to Stanley's friend Mitch (Karl Malden), she glosses over the less savory incidents in her past, but she soon discovers that she cannot outrun that past, and the stage is set for her final, brutal confrontation with her brother-in-law. Brando, Hunter, and Malden had all starred in the original Broadway version of Streetcar, although the original Blanche had been Jessica Tandy. Brando lost out to Humphrey Bogart for the 1951 Best Actor Oscar, but Leigh, Hunter, and Malden all won Oscars. ~ Hal Erickson, Rovi

Ann Dere
as The Matron

Mel Archer
as Foreman
View All