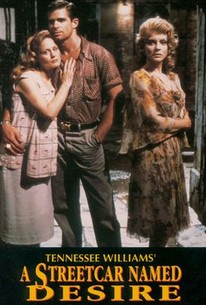 Ann Margret looks too healthy to portray Blanche DuBois, the physically and mentally fragile Southern-belle protagonist of Tennessee Williams' +A Streetcar Named Desire, but we forget this discrepancy five minutes into her marvelous performance. This TV-movie version of Streetcar costars Treat Williams as faded aristocrat Blanche's rude 'n' crude brother-in-law Stanley Kowalski; Williams is persuasive, though he tries so hard not to be Marlon Brando that he comes off as a bit mechanical. The 1984 Streetcar is more realistically staged than the near-impressionistic 1951 Vivien Leigh/Marlon Brando filmization. The storyline, concerning the battle of wills between the earthy, pragmatic Stanley and the delusional Blanche, remains the same in both films, as does the script's tendency to avoid the homosexual elements that were so important to Williams' original play. The newer film's photography is bathed in an ambler tint throughout, conveying both nostalgia for the era in which it is set (the late 1940s) and a visual literalization of Blanche's "yellowed with antiquity" former lifestyle. The 1984 Streetcar Named Desire is less a remake of the 1951 version than a companion piece--a praiseworthy alternate version of the same sturdy material.

Fred Sadoff
as Doctor
View All

There are no critic reviews yet for A Streetcar Named Desire. Keep checking Rotten Tomatoes for updates!

There are no featured audience reviews for A Streetcar Named Desire at this time.