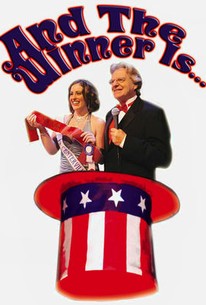 And the Winner is...

And the Winner is... Ratings & Reviews Explanation

We traveled to the small Midwest town of Centerville to film a documentary about "small town politics." Centerville turned out to be an amazing setting with its picture perfect town square, 15 traffic lights, and friendly faces that say hello as you pass them on the street. It truly seemed like a microcosm of America. As you can imagine, there wasn't much going on ... until we encountered a change in the town's history that we never could have imagined. In a moment's time, this quaint town was jolted alive as the mayor announced he would not be running for re-election and that the town would be electing their next mayor by a beauty pageant type of event. What? That's right! Can you imagine it? Neither could we. Suddenly, Centerville became a fascinating place as the citizens embraced the idea, aspiring mayors threw their hats into the ring, campaigns were launched, and competition ensued. To our pleasure, the candidates themselves were truely unique and colorful. We filmed all the action as Centerville swelled with excitement in anticipation of the big event. How can a town elect a mayor through a series of categories in which the candidates compete? Well, they did and you wouldn't believe the lengths some people will go to win. Initially, it seemed like an absurd idea, but after seeing it come to life, the similarities between politicians and beauty pageants contestants were strong. Think about it ... contestants need to be photogenic, have an amazing smile and wave, tell us the things we want to hear, and appear to act like children. Both scream through their actions "make me popular". For fun, we made a video to compare the two worlds. -- (C) Official Site

Critic Reviews for And the Winner is...

There are no critic reviews yet for And the Winner is.... Keep checking Rotten Tomatoes for updates!

Audience Reviews for And the Winner is...

There are no featured audience reviews for And the Winner is... at this time.

And the Winner is... Quotes