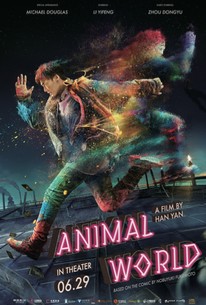 Drifting aimlessly through life, Kaisi (Li Yi Feng: Hundred Flowers Winner Mr. Six, Guilty of Mind) has racked up debts of several million having borrowed money from his friends. Lured with the promise of writing it all off, Kaisi leaves his ailing mother and childhood sweetheart Qing (Zhou Dongyu: Golden Horse winner Soul Mate, Under the Hawthorn Tree, The Thousand Faces of Dunjia) to board the ship Destiny and attend a gambling party controlled by the mysterious Anderson (Michael Douglas: Basic Instinct, Fatal Attraction, Wall Street). All players join the game with stars. For each game they lose, their opponent captures a star. Everyone is holding daggers behind their backs plotting dirty means by which to overcome their opponents. The game quickly deteriorates into a slaughter and Kaisi must battle save his own skin... Animal World is China's The Hunger Games meets The Matrix. A suspenseful action-packed blockbuster, Animal World is the new film from director Han Yan, best known for Go Away, Mr. Tumor which represented China for the 88th Academy Awards, and producer Chen Zhixi, famed for her hit films Lost in Thailand and Detective Chinatown.

There are no featured audience reviews for Animal World at this time.