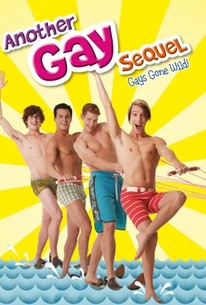 Four men go looking for love in all the wrong, right, and indeterminate places in this over-the-top sequel to Todd Stephens' comedy Another Gay Movie. Having lost their virginity and finished high school in the first movie, Andy (Jake Mosser), Griff (Aaron Michael Davies), Jarod (Jimmy Clabots), and Nico (Jonah Blechman, the only one of the four leads who reprises his role from the first film) are now college students who take some time off from their studies to attend a massive Gay Spring Break bash in Ft. Lauderdale, FL. The partiers decide to make things more interesting by having a contest in which the guy who manages to have the most sex over the course of the week is the big winner. However, Griff and Jarod are now a couple and are trying to remain faithful to one another, Andy meets handsome Luis (Euriamis Losada) and is too smitten to feel comfortable playing the field, and Nico is too effeminate to appeal to the buff beach boys who've overrun the city. As the four friends try to find a way to bring home the prize, they're confronted by Jasper (Will Wikle), who won the trophy last year and is looking to repeat the feat with the help of his sidekicks Jasper (Brandon Lim) and Jasper (Isaac Webster). Another Gay Sequel: Gays Gone Wild also features cameo appearances from Scott Thompson, RuPaul, Perez Hilton, Lady Bunny, and Colton Ford.

Brent Corrigan
as Stan the Merman

The Lady Bunny
as Sandi Cove

Perez Hilton
as Himself
View All