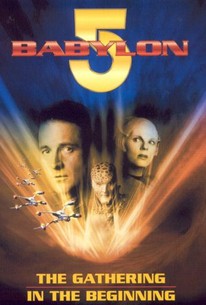 Babylon 5: In the Beginning

Babylon 5: In the Beginning Photos

The long-awaited "backstory" for the popular syndicated science-fiction saga Babylon 5 was provided some five years after the series premiered, courtesy of the two-hour movie special Babylon Five: In the Beginning. Set in the year 2278, the film takes a backward glance at the Earth-Minbari war, as seen through the eyes of Londo Mollari (Peter Jurasik), now the emperor of Centauri. Detailed for the first time are the tragic beginnings of the war, the involvement of the Minbari Delenn (Mira Furlan), and the death of Dukaht (Raynor Scheine). In addition to featuring most of the series' current regulars, the film also brings back such early defectors as Lt. Cmdr. Jeffrey Sinclair (Michael O'Hare) and Ambassador Kosh (Ardwright Chamberlain). As a bonus, Claudia Christian appears unbilled in her familiar role of Lt. Cmdr. Susan Ivanova, here depicted as an 18-year-old civilian. The film was written by series producer J. Michael Straczynski, and later novelized by Peter David. First telecast on January 4, 1978, Babylon 5: In the Beginning launched the two-year association between Babylon 5 and the TNT cable network.

Mike A. Kennedy
as Gen. Fontaine

Critic Reviews for Babylon 5: In the Beginning

There are no critic reviews yet for Babylon 5: In the Beginning. Keep checking Rotten Tomatoes for updates!

Audience Reviews for Babylon 5: In the Beginning

Babylon 5: In the Beginning Quotes