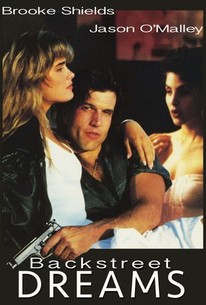 Not to be confused with the oft-filmed Fannie Hurst yarn Back Street, Backstreet Dreams is a contemporary drama of Humanity vs. the Streets. Jason O'Malley plays a New York hoodlum who doesn't trust his wife Sherilyn Fenn as far as he can throw her (and for good reason). The only person O'Malley truly cares for is his autistic son Shane, played by twin children Joseph and John Viezzi. Brooke Shields (who's better than you might think) enters the scene as a PhD candidate who hopes to get through to Shane. Now it is the unfaithful Fenn's turn to seethe with jealousy as Shields applies her "force holding" theory to Shane, she and O'Malley draw closer together. O'Malley is so taken by Shields' compassion that he severs his mob ties--but Big Boss Burt Young won't let him off so easy, and uses Shane as a "bargaining chip." Backstreet Dreams appears at times to be three films jumbled together; every time a story element starts rolling, it is exiled to the back burner in favor of another gratuitous subplot.

Robby Robinson
as Robert
View All

There are no critic reviews yet for Backstreet Dreams. Keep checking Rotten Tomatoes for updates!

There are no featured audience reviews for Backstreet Dreams at this time.