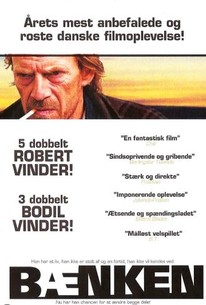 A man is given one last chance to repair a broken relationship with his daughter in this downbeat drama. Kaj (Jesper Christensen) once had both self-respect and a solid career as a chef, but these days he's an alcoholic who spends most of his days drinking with a handful of companions in a suburban park near Copenhagen. Liv (Stine Holm Joensen) is a woman trying to run away from a bad relationship with her abusive husband Lars (Lars Brygmann); she and her son Jonas (Marius Sonne Janischefska) move into an apartment near the park, and Kaj is shocked to discover she is the daughter he abandoned nearly two decades before. Kaj invites Liv to dinner only to realize that she isn't sure who he is -- and that she's not at all happy to discover he is her father. When Liv finds herself in dire financial circumstances, she turns to Lars, whose violent temper hasn't mellowed. As Kaj's drinking spirals out of control, he receives a call from Liv; she's in the hospital, seriously injured in a fight with Lars, and she needs Kaj to look after Jonas. Baenken was the first feature film from writer and director Per Fly.

Critic Reviews for The Bench

There are no critic reviews yet for The Bench. Keep checking Rotten Tomatoes for updates!

Audience Reviews for The Bench

There are no featured audience reviews for The Bench at this time.