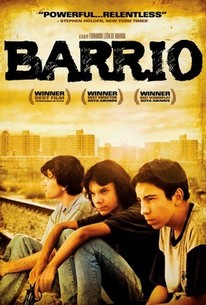 It is August in Madrid, and the heat bears down unrelentingly on the bleak streets of the housing projects, far from the parks and tree-lined avenues of the city center. Three fifteen- year-olds, Manu, Rai, and Javi, always together, always on the move, struggle with the age-old problems of class, the season, and their age: lack of money and opportunity; boredom; and sex, or, more accurately, thoughts of sex. Small apartments, large families, and unemployment create an explosive mix that drives them to the streets, while the alluring images of television and well-stocked but untouchable store windows fuel their imaginations with fantasies that lie beyond their reach. They dream of escape to the cool of the seaside and vacation at a bed-and-breakfast staffed with willing and experienced maids. Adolescent dreaming, rap, and bravado relieve the monotony for a while, but talk of escape and women is just that. An occasional flicker of romantic possibility presents itself, but our three heroes are still more comfortable running with the pack. Roaming the streets, they eventually find trouble, then more trouble, as youthful pranks take a serious turn and their character is tested. Which one will grow up? Which one will rebel? Will they find their way out? With a perfect ear for adolescent dialogue, director Fernando Leon de Aranoa takes us inside the lives of Manu, Rai, and Javi. Barrio, his second film, is a fresh and perceptive study of the adolescent quest for identity in a troubled setting of family strife, petty crime, drugs, and marginalization.

There are no critic reviews yet for Barrio. Keep checking Rotten Tomatoes for updates!