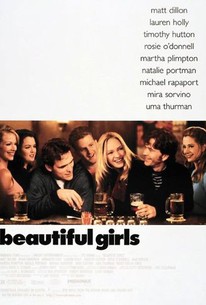 A warm, thoughtful dramedy about male insecurity, Beautiful Girls is buoyed by an excellent cast - particularly Natalie Portman in a stunning early role.

A high-school reunion in a snowy New England town brings together a band of former classmates who go from tavern to tavern discussing sex and relationships. The classmates include NYC pianist Willie who has found some success playing night clubs. While in town, Willie finds himself unnaturally attracted to a seductive 13-year-old girl. Then there's Tommy, the aging jock who though seriously involved with Sharon, cannot resist the occasional walk down memory lane by sleeping with the former prom-queen Darian, who is also married. Immature Paul is so obsessed by the swimsuit-clad supermodels plastered all over his walls that Jan, his waitress girlfriend, dumps him. Paul then begins going out with gorgeous Andera, who tries to explain that she is more than beautiful. Finally there is Stinky, who is just visiting, and Gina, who fancies herself a feminist counselor.

Tom Gibis
as Peter the Eater

Joyce Lacey
as Reunion Classmate No. 1

Ollie Osterberg
as Drinker No. 1

Sterling Robson
as Drinker No. 2

Edward Kaspszak
as Drinker No. 3

Frank Anello
as Irv
View All