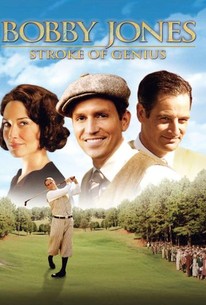 Based on the real-life story of golf legend Bobby Jones, Bobby Jones, Stroke of Genius features Jim Caviezel as the temperamental but highly talented amateur who threw a wrench in the golf world of the mid-'20s. Though Jones would eventually become the founder of the internationally renowned Augusta National Golf Club, which is father to the prestigious annual tournament known as The Masters, the combination of his ambition and tumultuous relationship with the media interfered with his personal life to such an extent that his future in the sport seemed doomed. With the help of his wife, Mary Malone Jones (Claire Forlani), the gifted, oftentimes tortured golfer was forced to balance his family life and the public scrutiny regarding his golf career, lest both of them dissolve entirely. Directed by Rowdy Herrington, the film also stars Jeremy Northam, Aidan Quinn, and Malcolm McDowell. ~ Tracie Cooper, Rovi

Justice Leak
as Guy on Street

Kasey Leigh
as Coed No.2

Phillip DeVona
as Reporter No.2

David Dwyer
as Reporter No.3

Pat Cusick
as Reporter No.4

Kevin Stillwell
as Reporter No.5

Jamie Moore
as Reporter No.6, Philadelphia

Oliver Scott
as Reporter No.7, Merion

Geoff McKnight
as Reporter No.9, Merion

There are no critic reviews yet for Bobby Jones: Stroke of Genius. Keep checking Rotten Tomatoes for updates!