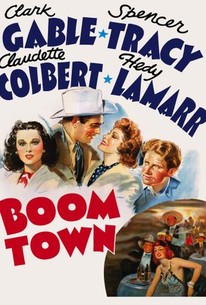 Clark Gable is "Big John" and Spencer Tracy is "Square John"; both "Johns" seek their fortunes in the Texas oil fields. They simultaneously fall in love with Claudette Colbert, but it's "Big John" who wins out. When both Johns grow rich on oil, "Big John" lets money go to his head, and he begins neglecting wife Colbert for Hedy Lamarr, the "been around" companion of businessman Lionel Atwill. "Square John", who still carries a torch for Colbert but doesn't want to see her heart broken, tries to buy off Lamarr; when this fails, he decides to ruin "Big John" financially. But when "Big John" is charged with violating anti-trust rules by the crooked Atwill, "Square John" rushes to the side of his old pal. Both men end up where they started--broke but happy. "Big John" returns to faithful Colbert, while "Square John" stands by with an ear-to-ear grin. Boom Town was the last film to co-star Clark Gable and Spencer Tracy; though Tracy was fond of Gable, he resented playing "eunuch" in their on-screen romantic triangles. Claudette Colbert's scenes with Clark Gable are pleasant enough, but the sparks that had ignited their scenes in It Happened One Night are largely absent here.