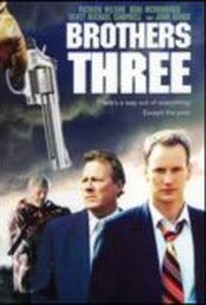 A man seeking to escape his turbulent family life is dragged kicking and screaming back into his dysfunctional past when his two siblings summon him to a remote cabin to discuss their late father's true fate, and finally call the lies of the past out into the open. When Peter (Patrick Wilson) took a wife and entered into a new career, he assumed his painful past would simply fade away. But old ghosts have a habit of lingering around even when they can't be seen, and as Peter arrives at a run down cabin at the request of his siblings Rick (Neal McDonough) and Norman (Scott Michael Campbell), it quickly becomes apparent that the specters of Peter's past are still very real in his former reality. As Peter's brothers relay the details of their final moments with their recently deceased father, those old familiar mind games come into play once again. Something about their story just doesn't seem right, because the presence of their father still looms heavy in the air around the brothers - stirring up the lingering lies that once protected them from the bitter truth of their lives. The joyful memories are fleeting, gradually giving way to revelations that will serve as the only honest moments these brothers ever shared. No one will leave this cabin until this volatile situation has reached its logical conclusion, and each man has finally ventured into the dark place they have spent their entire lives trying to avoid.

There are no critic reviews yet for Brothers Three: An American Gothic. Keep checking Rotten Tomatoes for updates!