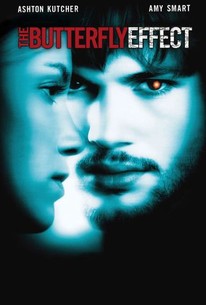 The premise is intriguing, but it's placed in the service of an overwrought and tasteless thriller.

Final Destination 2 screenwriters Eric Bress and J. Mackye Gruber make their directorial debut with the sci-fi thriller The Butterfly Effect. Evan Treborn (Ashton Kutcher with facial hair) wants to free himself from his disturbing childhood memories. As a kid, he often blacked out for long periods of time and tried to detail his life in a journal. As a young adult, he revisits the journal entries to figure out the truth about his troubled childhood friends Kayleigh (Amy Smart), Lenny (Elden Henson), and Tommy (William Lee Scott). When he discovers he can travel back in time in order to set things right, he tries to save his beloved friends. However, he finds out that relatively minor changes can make major problems for the future. The Butterfly Effect also stars Eric Stoltz, Ethan Suplee, and Melora Walters. The title was inspired by the story A Sound of Thunder by Ray Bradbury. ~ Andrea LeVasseur, Rovi

Jake Kaese
as Lenny at 7

Cameron Bright
as Tommy at 7

John B. Lowe
as Professor Carter

June B. Wilde
as Waitress

J. Jackson Kocela
as Evan at 3
View All

Critic Reviews for The Butterfly Effect

Audience Reviews for The Butterfly Effect