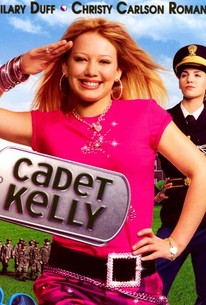 Hilary Duff is at her best in Cadet Kelly - an inspiring story about female friendship and overcoming the odds.

Two of the Disney Channel's brightest young sitcom stars, Hilary Duff (Lizzie Maguire) and Christy Romano (Even Stevens), team up for laughs and tears in the made-for-cable Cadet Kelly. The life of cool, artistically inclined 14-year-old Kelly Collins (Duff) is turned upside down when she is uprooted from Manhattan and whisked off to the campus of George Washington Military School in upstate New York. The move was instigated by Sir (Gary Cole), a retired general and the new husband of Kelly's mother. Hoping to impress her stepfather, Kelly enlists in the school, where her freewheeling eccentricities immediately run afoul of her hard-hearted, 17-year-old squad leader, Jennifer Stone (Romano). Though Kelly does her best, the pressure brought to bear upon her by military protocol is enough to have her contemplating desertion -- and even her growing fondness for upper classman, Brad (Shawn Ashmore), may not be enough to bring her back. Originally broadcast by the Disney Channel on March 8, 2002, Cadet Kelly made its ABC network debut on July 14, 2002, as an episode of the weekend "Wonderful World of Disney" anthology.