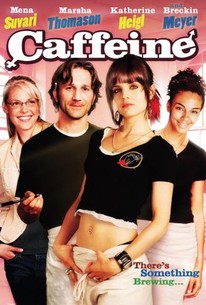 A cozy coffeehouse serves as the setting for director John Cosgrove's over-caffeinated tale of sexual peccadilloes and complicated relationships starring Mena Suvari, Katherine Heigl, and Breckin Meyer. It's a typical lunch hour in London, and The Black Cat Café is fast filling up with patrons whose sexual lives have become a tangled web of infidelity, kinky idiosyncrasies, and betrayal. Stoned on some of the most potent weed in jolly old England, a neurotic young commitment-phobe attempts to keep his cool when he has an unexpected run-in with his bitter ex-girlfriend. But he's not the only one whose secrets are about to come out today, because after a shy young lady is forced to fend off a boorish blind date whose preconception of her couldn't be more wrong, a possessive boyfriend discovers that his current girlfriend was once a well-known adult film star. Later, after a fragile old lady mistakes a patron for the ex-husband she once found in a compromising position with a kinky prostitute and a high-powered attorney discovers that her husband-to-be likes to dress in ladies' clothes, the manager's boyfriend claims that a recent ménage à trois is perfectly forgivable since it was conducted with a pair of identical twins.

Nikki Collins
as Tarty Girl No.1

Teena Collins
as Tarty Girl No.2

Brooke Mason
as Customer No.4