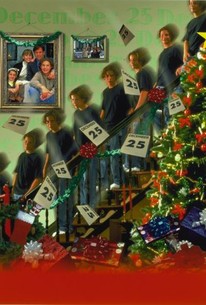 This junior-level Ground Hog Day stars Erik Von Detten as Billy Jackson, a 13-year-old Scrooge in the making. Lacking the athletic prowess to play with his Christmas presents, mooning over a girl who doesn't know he's alive (and whose boyfriend is a bully), and ruminating over the fact that his rich uncle's new Val-U-Mall will put his father's store out of business, Billy has absolutely no reason to believe in Santa Claus--and he relays this sentiment to his kid sister Sarah (Yvonne Zima). In a burst of retaliatory stubbornness, Sarah counters Billy's sourness by wishing that it would be Christmas every day. Wham! She gets her wish, and Billy is trapped in an eternity of Christmases--and of course, he's the only person who is aware that time is standing still. At first intending take advantage of his foreknowledge by getting even with various enemies and selfishly grabbing up whatever he wants, Billy gradually realizes that the only way December 26th will ever dawn is if he stops thinking about himself and starts caring about others. First telecast by the Family Channel on December 17, 1996, the made-for-cable Christmas Every Day has become something of a Yuletide perennial in recent years.

Governor George Allen
as Himself

Critic Reviews for Christmas Every Day

There are no critic reviews yet for Christmas Every Day. Keep checking Rotten Tomatoes for updates!

Audience Reviews for Christmas Every Day