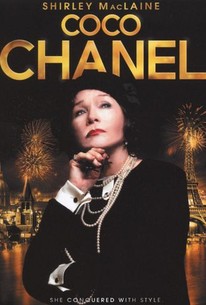 Raised in a Catholic orphanage in provincial France, young Coco Chanel never imagined that her life would one day become an epic story worthy of a Lifetime original movie, full of passionate romance, and trailblazing pioneering in the world of fashion. The movie opens on 1950's Paris, as a 70 year old Coco (Shirley MacClaine), now a household name, is embarking on the second wave of her career with her first new collection in over a decade. Soon, a series of flashbacks illustrate how she got to be where she is today, both personally and professionally. Young Coco (played by Barbora Babulova) is seen working tirelessly as a seamstress, showing a unique talent for making garments more flattering and convenient despite her lowly position. Pursued by a rich man named Étienne, she soon leaves the thankless job for the comfort of life as a kept woman, but class differences eventually tear them apart. The relationship gives Coco the chance to perfect her skill as a hatmaker, however, and she leaves Etienne to open her own shop. A new romance with an Englishman named Arthur (known affectionately as "Boy") soon blossoms, and proves to be the greatest happiness and greatest tragedy of her life - but will the effects of this epic tale of love, war, and betrayal eventually prevent the burgeoning fashion maverick from fulfilling her true potential?

Maggie Steed
as Adrienne (1954)
View All