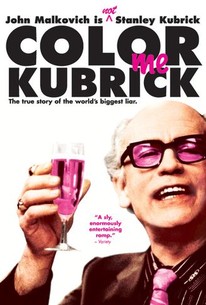 Colour Me Kubrick has a fascinating premise, but provides little insight into Kubrick and the man who impersonated him.

In the mid-'90s, an Englishman by the name of Alan Conway (John Malkovich) conned many people into believing that he was the reclusive American director Stanley Kubrick, despite the fact that Conway was openly gay, bore no physical resemblance to Kubrick, and knew little about the director's work. Conway's story has been loosely adapted into the comedic feature Colour Me Kubrick. Anthony Frewin, who worked as Kubrick's personal assistance for many years, wrote the script, and Brian Cook, who served as Kubrick's assistant director on several films, including Barry Lyndon and Eyes Wide Shut, marks his directorial debut with the film. Colour Me Kubrick follows Conway on a number of adventures, wherein he cadges drinks, cash, sex, and more from unsuspecting victims, ranging from a heavy metal band to a wine bar owner (Richard E. Grant) to a British lounge singer (British television comic Jim Davidson making his feature-film debut), who are awestruck by his purported fame and fortune, and willing to overlook Conway's genuinely bizarre behavior in the hopes of impressing the great director. Conway's act reached its pinnacle when he temporarily pulled the wool over the eyes of then-New York Times theater critic Frank Rich (William Hootkins). Colour Me Kubrick features cameos by Ken Russell, Honor Blackman, Peter Sallis, and Marc Warren. The French production had its international premiere at the 2006 Tribeca Film Festival. ~ Josh Ralske, Rovi

Gabriel Diggs
as DJ in nightclub

Spencer Hawken
as Man at Bar

Mark Webb
as Policeman
View All

News & Interviews for Color Me Kubrick

Critic Reviews for Color Me Kubrick

Audience Reviews for Color Me Kubrick