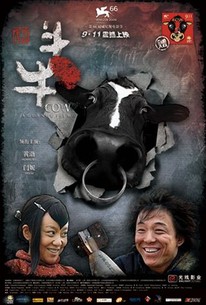 A man and his best friend become unlikely heroes in the midst of war in this purposefully absurd comedy drama from China. Niu'er (Huang Bo) is a slightly dim-witted peasant living in the village of Yizhen during the early days of World War II. Fate has bestowed upon Niu'er a rather remarkable gift -- a large and loyal Dutch cow that gives remarkable quantities of tasty milk. While Niu'er himself isn't much of an asset to the village, his cow certainly is, and as Japanese forces make their way through Yizhen, determined to lay waste to everything in their path, Niu'er is willing to put his life on the line to protect his bovine pal. When the Chinese army and a large band of refugees arrive in Yizhen, the cow's impressive milk-producing skills help save the day, and as Niu'er protects her from soldiers that would prefer to turn her into beefsteak, the cow reveals some unexpected abilities to help her human benefactors. Directed by Guan Hu, Don Niu (aka Cow) was an official selection at the 2009 Venice International Film Festival.

There are no featured audience reviews for Cow (Dou niu) at this time.