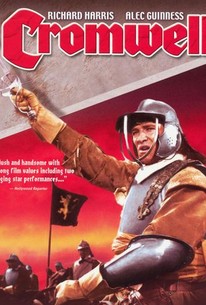 Cromwell has one of the most cockeyed points of view of any historical epic ever made. The audience is supposed to be pulling for 17th-century Protestant leader Oliver Cromwell, who out of religious fervency declares civil war against the weak-willed British monarch Charles I when the latter threatens to reinstate Catholic rule in England. But as played by Richard Harris, Cromwell comes off like a single-issue fanatic, slightly less sympathetic than your average talk-show wacko. As for Alec Guinness' King Charles, he is a weakling to be sure, but is so essentially human (even when pulling a few fast ones in the climactic negotiations with Cromwell) that the audience is rooting for him to come out on top. Perhaps this ambiguity was deliberate, underlining the basic fact that in a religious war, it is a tricky proposition to choose sides. Still, Cromwell might have been easier to take had not the title character been drawn in such broad strokes.

Alec Guinness
as Charles I

Robert Morley
as Earl of Manchester

Patrick Wymark
as Earl of Strafford

Charles Gray
as The Earl of Essex

Anthony May
as Richard Cromwell

Robin Stewart
as Prince of Wales

Llewellyn Rees
as The Speaker