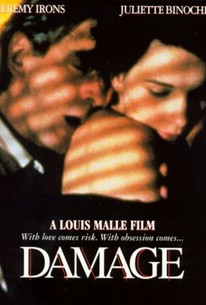 Adapted from Josephine Hart's spare novel by British screenwriter David Hare and French director Louis Malle, this brooding erotic drama concerns the obsessive sexual relationship between an English politician and his son's lover. Stephen Flemming (Jeremy Irons), an up-and-coming member of Parliament, has a beautiful and loving wife, Ingrid (Miranda Richardson), and two children, including son Martyn (Rupert Graves), a successsful journalist. Sparks fly, however, when Stephen meets beautiful art-world denizen Anna Barton (Juliette Binoche), Martyn's new girlfriend. A measured, seemingly passionless man who believes that life can be controlled, Stephen suddenly finds himself unable to resist brief but intense liaisons with the mysterious, melancholy Anna. Eventually she explains the palpable air of sadness that hangs over her: When she was 15, her beloved older brother committed suicide because he could not possess her. "Remember," Anna warns Stephen, "Damaged people are dangerous. They know they can survive." Drawn to Anna and the passion she engenders in him, Stephen tries to justify his betrayal by telling himself Martyn isn't serious about Anna; he is stunned, then, when the two announce their engagement. On the advice of Anna's mother (Leslie Caron), who sees right through the charade, Stephen tries to break things off. But soon the affair resumes with full force, eventually destroying several lives. Although Damage's stark, frank sex scenes were trimmed to attain an R rating for theatrical release, the original, uncut version is available on video and DVD. Richardson received an Oscar nomination for her work.