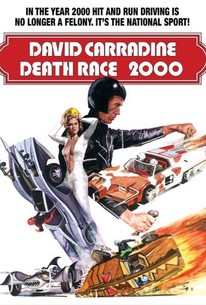 Cult hero Paul Bartel directed this low-budget satire in which America's passion for cars, violence, and sporting events are finally brought together in one convenient package. In the not-so-distant future, the United States has become a totalitarian regime overseen by the charming but sinister Mr. President (Sandy McCallum), who, in order to satisfy the masses' need for entertainment (and to quench their thirst for violence), has created a new national sport -- the Death Race, a nationwide road rally in which the winner is not determined by who finishes first, but by who scores the most points along the way by running over hapless pedestrians. Aspiring champions Machine Gun Joe Viterbo (Sylvester Stallone), Calamity Jane (Mary Woronov), Nero the Hero (Martin Kove), and Matilda the Hun (Roberta Collins) are all looking to take the top honors away from Frankenstein (David Carradine), a half-man/half-machine who has been built to be the best racer on Earth and can outrun and outkill anyone on the circuit. However, not everyone likes the Death Race, and revolutionary leader Thomasina Paine (Harriet Medin) wants to sabotage the event in the name of restoring democracy; her plan is to foil Frankenstein's expected victory by smuggling her daughter Annie (Simone Griffeth) into Frankenstein's race car as his navigator. Featuring David Carradine at the height of his Kung Fu fame (and Sylvester Stallone a year before Rocky), Death Race 2000 was a major drive-in hit in 1975; Bartel and Carradine teamed up for another road race movie, Cannonball, a year later, and a semi-sequel, Death Sport, appeared in 1978. ~ Mark Deming, Rovi

Roberta Collins
as Mathilda The Hun

Martin Kove
as Nero the Hero

Fred Grandy
as Herman the German