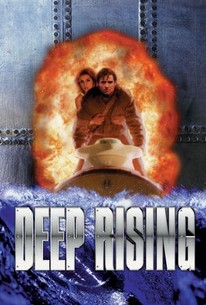 Its fleeting glimpses of creature feature mayhem are certainly dumb fun, but Deep Rising cribs from far too many better movies to stand on its own.

Stephen Somers wrote and directed this $50 million science-fiction action-thriller. Set in the South China Sea, the story has been described as a cross between The Poseidon Adventure, Alien, and Die Hard. On the maiden voyage of the luxury liner Argonautica, pickpocket Trillian (Famke Janssen) is caught stealing jewels and locked up. After the ship's communication system is infected with a virus, the ship collides with a massive underwater object. When John Finnegan (Treat Williams) and others board the Argonautica, they are surrounded by death. Survivors Trillian, builder Simon Canton (Anthony Heald), and others talk of sea monsters, but Hanover (Wes Studi) doesn't believe them -- until the fanged, squid-like creature (designed by Rob Bottin) extends its huge tentacles and makes its presence known to all. Filmed in Vancouver and the northern Pacific under the working title Tentacles.

Derrick O'Connor
as The Captain

Jim May
as Mystery Man

Box Office Preview: "Talladega Nights" on Course to Finish First
Sommers Collides (again) with "Worlds"
"Mummy" Director to Spend a "Night at the Museum"
View All