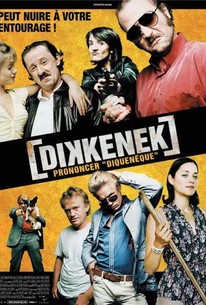 Two thick-headed pals stumble through a town where nearly everyone is as dumb as they are in this manic comedy from Belgium. Jean-Claude (Jean-Luc Couchard) is a loud-mouthed, know-it-all and full time boor who is best friends with Stef (Dominique Pinon), a self-styled lady killer who would do better with the fair sex if he could work up the ambition to wake up in the morning. Stef has decided that despite his lofty ambitions, he may need some help in finding the woman of his dreams, and embracing loyalty rather than logic he turns to Jean-Claude for advice. As Jean-Claude explains his deeply flawed techniques for impressing women, he and Stef cross the paths of a handful of local eccentrics, including perpetual mugging victim Greg (Jeremie Renier), misguided school teacher Nadine (Marion Cotillard), sex crazed Natacha (Melanie Laurent), short-tempered cop Laurence (Florence Foresti), wealthy spoiled brat Fabianne (Marie Kremer), and abattoir enthusiast Claudy (Francois Damiens).

François Damiens
as Claudy
View All

There are no critic reviews yet for Dikkenek. Keep checking Rotten Tomatoes for updates!

There are no featured audience reviews for Dikkenek at this time.