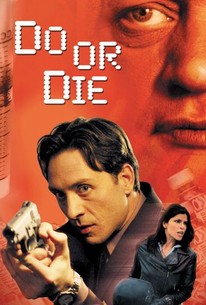 Do or Die Ratings & Reviews Explanation

Do or Die Photos

As a highly infectious ageing virus causes chaos around the world, one woman sets out on a desperate mission to save the life of her unborn child, and perhaps the rest of the human race in the process. The time is the not-so-distant future. An ageing virus has divided the world population between "cleans" and "infecteds." Once infected, the only way to avoid ageing one year every twenty-four hours is to take a daily dose of Anzanol, a drug designed to slow the effects of the virus. Meanwhile, as the creator of Anzanol schemes to keep his empire thriving at any cost, Ruth Hennessey (Polly Shannon) learns that she has gotten pregnant by her infected husband, who confides to his wife on his deathbed that he was close to discovering a cure for the disease. Fearing for the health of her unborn child, Ruth makes it her mission to finish her husband's research and ensure that the rest of the population won't have to suffer like he did. But the creator of Anzanol knows that sales of his drug will quickly dry up if a cure is found, and he's willing to kill in order to ensure that Ruth fails in her mission to eradicate the disease.

Critic Reviews for Do or Die

There are no critic reviews yet for Do or Die. Keep checking Rotten Tomatoes for updates!

Audience Reviews for Do or Die

There are no featured audience reviews for Do or Die at this time.

Do or Die Quotes