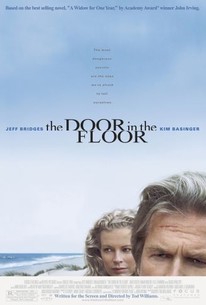 The Door in the Floor

Though uneven in tone, this is one of the better adaptations of John Irving's novels, with Jeff Bridges giving one of his best performances.

The Door in the Floor Ratings & Reviews Explanation

The Door in the Floor Photos

Set in the beach community of East Hampton, New York, one pivotal summer in the lives of famous children's books author Ted Cole and his beautiful wife Marion is chronicled. Their once-great marriage has been strained by tragedy. The Coles lovingly parent their surviving child, bright 4-year-old Ruth, who takes everything in stride as perhaps only a child can. But Marion's equation of love with loss, coupled with Ted's infidelities, points towards a much-needed change in the relationship. That may come in the form of Eddie O'Hare, the young man Ted hires to work as his summer assistant--and, Ted hopes, the catalyst to invigorate the Coles' bond of marriage. Eddie idolizes Ted, but Ted's erratic work habits soon leave Eddie to his own devices. Marion becomes an object of desire for Eddie, rekindling in her some surprising emotions as a mother and as a woman. To Eddie's surprise and delight, his yearning is potently reciprocated. As he becomes passionately entwined with the seemingly fragile yet increasingly bold Marion, Eddie comes to realize that, and similarly, Ted's surface fecklessness hides something deeper within. As the summer draws to a close, Marion and Ted must make difficult decisions about the future of their family.

Libby Langdon
as Woman at Reception

News & Interviews for The Door in the Floor

Critic Reviews for The Door in the Floor

Audience Reviews for The Door in the Floor

The Door in the Floor Quotes