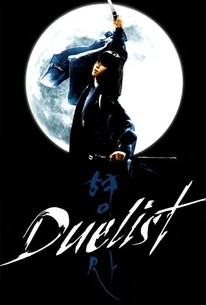 Director Lee Myung-se returns to the screen with his long-awaited follow-up to the acclaimed 1999 policier Nowhere to Hide. Duelist takes place in Korea during the Chosun dynasty, where a large-scale counterfeiting scheme threatens to send the whole country into chaos. Two cops, Detective Ahn (Ahn Sung-kee, who played the killer in Nowhere to Hide) and his young protégé, Namsoon (Ha Ji-won of Phone), stumble upon the plot while they're working undercover at a street fair. A masked swordsman (Kang Dong-won, whose character is identified in the credits as "Sad Eyes") uses his amazing skills to distract onlookers while he pulls off a robbery. Namsoon doggedly pursues him, and finds herself strangely but inexorably drawn to the young man, even as they have one violent encounter after another. While Sad Eyes relies on his swordsmanship, Namsoon is an expert with her two daggers. Their skills are comparable, and inconveniently enough, they seem to be falling in love. Eventually, the police investigation leads to Sad Eyes' employer, the Minister of Defense (Song Young-chang, another frequent collaborator of director Lee's), who is apparently using the counterfeiting plot in an effort to take over the government. Duelist had its New York premiere at the 2006 New York Asian Film Festival, presented by Subway Cinema.