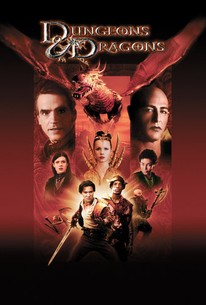 Critics say this movie has a cheap look and is badly directed. Despite the presence of talented actors, the performances are really bad, and additionally, some people are offended at Marlon Wayans' character, calling it a racist throwback to black stereotypes.

The Empire of Izmer has long been a divided land. The Mages - an elite group of magic users - rule whilst the lowly commoners are powerless. Izmer's young Empress, Savina, wants equality and prosperity for all, but the evil Mage Profion is plotting to depose her, and establish his own rule. In order to prevent Profion from taking over her kingdom, the Empress must find the legendary Rod of Savrille that controls the powerful Red Dragons. Enter two thieves, Ridley and Snails, who unwittingly become instrumental in the search for the Rod. They are joined by Mage Apprentice Marina, a feisty Dwarf named Elwood, and helped by the Empress's expert tracker, the Elf Norda, as they outrace Profion's chief henchman Damodar to find the magical Rod that will set their Kingdom free.

Martin Astles
as Orc No. 1

Matthew O'Toole
as Orc No. 2

Nicolas Rochette
as Thief No. 2

David Mandis
as Thief No. 3

Stanislav Ondricek
as Another Mage

Andrew Blau
as Elf No. 1

Marta Urbanova
as Elf No. 2