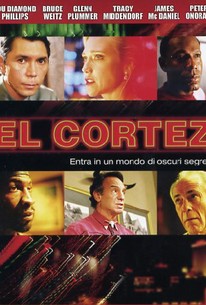 An autistic ex-con attempting to readjust to life on the outside finds that the past isn't so easy to escape as he becomes caught in the middle of a deadly triple-cross in director Stephen Purvis' labyrinthine thriller. For five long years Manny (Lou Diamond Phillips) has repaid his debt to society by serving time in a prison for the criminally insane. Now the day of his parole has finally arrived, and after returning to Reno Manny takes up residence at a local motel and soon finds employment as a clerk at the Hotel El Cortez. Upon striking up an amiable friendship with crippled prospector Popcorn (Bruce Weitz), Manny is quickly recruited to help his new friend convince wealthy gambler Russo (Peter Onorati) to invest in the struggling gold-hunter's potentially prosperous mine. Complications soon arise, however, when Arnie (James McDaniel), the vengeful cop who had arrested Manny, pressures the mentally handicapped ex-con to keep an eye on local drug dealer Jack (Glenn Plummer) - who is currently staying in the same hotel as Manny. When Jack's scheming girlfriend Theda (Tracy Middendorf) learns about Popcorn's goldmine and subsequently attempts to seduce Manny in hopes of learning more, shifting alliances and deadly secrets thrust all involved into a murderous game of betrayal and death.

There are no featured audience reviews for El Cortez at this time.